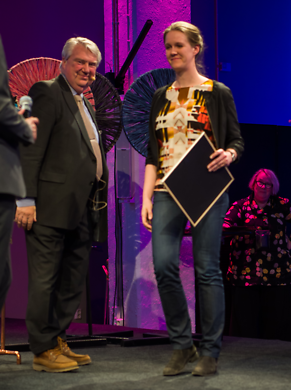 When not running her farm, Katarina Bengtsson is combining science and technology with textile.

“Being involved in a startup is a combination of being in science and being a farmer. You are exploring something unknown which might or might not work.”

LunaMicro is one of the 10 winners of the 2018 ÅForsk Entrepreneurial Scholarship – hence deeptech of the week!

Introducing the next generation functional clothing, developing an active fabric that transports sweat from the inside to the outside of the garment.

Katarina Bengtsson is co-founder to LunaMicro. She got involved with the company during her time as a PhD student in the Transport and Separations group at Linköping University, together with her supervisor Nate Robinson, and two other PhD students Per Erlandsson and Sara Nilsson.

– During my PhD studies I worked on how different polymeric materials can be used to improve the functionality of different devices. As a part of my PhD project, I developed and characterized the fabric pump that we now are trying to commercialize.

The work around LunaMicro was an opportunity to combine her interests in textiles and technology.

– After finishing my PhD, I couldn’t resist continuing to work with the team to see where we could go with this. Textiles have always been a big interest of mine, I learned how to make bobbin lace when I was 6 years-old and I’ve traveled the world to learn more about textiles and different techniques. All just for fun.

Katarina Bengtsson have a background in biotechnology and says she didn’t think she would work with textiles.

– Though it now seems like that is what I’m doing. I enjoy trying to get things to work, and try different practical applications.

Katarina Bengtsson grew up on a farm, which she now owns and runs as a side business since five years back.

– Imagine that you bike to work. It’s a warm, rainy summers day, so you wear your rain jacket. Even if the rain jacket keeps the rain out, you’re still likely to be soaked when you reach your destination. Not from the rain, but from sweat, since your rain jacket traps the sweat. LunaMicro has a solution to this.

The company has developed a fabric that actively transports sweat from the inside to the outside of the garment, ensuring that users arrive dry at their destination.

– We want to introduce the market to an active fabric which can be used in the next generation functional clothing.

LunaMicro was established to commercialize research results from the Transport and Separations group at Linköping University, led by Nate Robinson.

– It started with a patent protecting the use of the polymer electrode technology in electrokinetic pumps like the textile pumps that we currently focus on.

Initially, the team was looking into ways of applying their technology to improve point-of-care diagnostics, to become cheaper, faster and more robust.

– Then somewhere along the way, we realized that our patented technology could be applied to textiles to improve functional garments.

LunaMicro is a part of the LEAD business incubator in Linköping since September 2017.

– It’s an inspiring environment where I get the opportunity to meet others who are in a similar situation and get input from other startup stories. And we get great support from our coaches, helping with resources and support to develop our business and team.

In order to become successful, LunaMicro believes in collaborating with various actors along the value chain including manufacturers and retailers. They are working with a Swedish sports garment company, bringing certain specifications of textiles and valuable information about the manufacturing process, Katarina explains.

– They will most likely be the first to receive market garments with our integrated textile pump. In addition, we have met with several manufacturers to find someone that can produce our textile pump on a larger scale. We have received a lot of valuable help from Jirotex just outside of Borås, and from the Smart textile institute.

Katarina Bengtsson says that change of mindset has been a challenge.

– Changing the roles from a student and supervisor mentality to moving into a mutual partnership actually means being boss of your former boss. Good communication is key, and it is important to find ways of breaking old habits on how you interact.

It’s also about changing the “academic mindset”, she explains.

– You’re supposed to explore, develop, and learn more about a specific subject. That’s very different to what is important when building a company. Instead you have to prioritize resources, ensure that what you work on will add value to the company, that it grows and eventually becomes profitable.

Being involved in a startup is a combination of being in science and being a farmer, Katarina explains.

– You are exploring something unknown which might or might not work. You have to be curious and find new solutions, just as in research. Being a farmer, you have to be innovative to solve big and small problems each day, while being cost-effective.

– I hope that the ÅForsk scholarship, and the publicity around it, will let more people know what we’re doing. This scholarship will allow me to prioritize developing certain skills, such as leadership and marketing, which will be an important part of making LunaMicro a successful company.