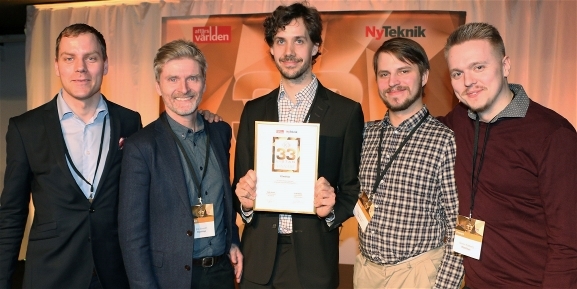 Elastisys is the impressive Umeå spinoff tackling an international market with cutting edge technology, and here’s what the CEO Robert Winter has to say about it.

“Today even our cars are self-driving, why should IT infrastructure, that is underpinning our whole society today, still be run manually by human operators 24/7?”

Elastisys is deeptech of the week!

Monitoring and learning the behaviour of mission critical applications, allowing a prediction with very high accuracy – both for human operators, and full on automation.

– I came into the company last year when we raised a seed round and we hired me and a few people from the research group, says Robert Winter.

He’s the CEO of Elastisys, a spinoff from Europe’s largest research group in cloud management.

– My background is in computer science and I’ve mostly worked in IT consulting with sales, leadership, project management and software development. The rest of the team is also from computer science but with a mix of academic and business backgrounds, says Robert.

The team is located in Umeå, Sweden, and has a diverse cultural background with people from all over the world, Robert tells us.

– I have no entrepreneurial background but the prospect of working together with some of the smartest minds out there, tackling an international market using cutting edge technology was just too enticing to pass up.

Elastisys focus on how to run mission critical applications in cloud-like environments optimized for performance and availability.

– As our technology is applicable across a wide range of industries, no day is the same and you have to be able to relate to and understand IT operational use cases ranging from telecom, ecommerce to traditional manufacturing industries, says Robert.

Based on 15 years of research

The company was founded in 2011, and the idea of applying intelligent systems to run IT operations autonomously stems from the 15 years of research in autonomous distributed systems that has been performed at Umeå University.

– The elevator pitch is basically that today even our cars are self-driving, why should IT infrastructure, that is underpinning our whole society today, still be run manually by human operators 24/7?

Elastisys monitor and learn the behaviour of mission critical applications, which allows a prediction with very high accuracy on their future load.

– This can be used for monitoring, i.e. presented to human operators for them to take action on, or for full on, closed-loop automation, where our system also automatically prevents possible problems before they occur, Robert explains.

He says that no matter how much people are used to the idea of AI running parts of their lives, companies’ IT infrastructure is key to deliver their services no matter the industry.

– A lot of people simply don’t want to automate to the degree where they feel they lose control of that mission-critical operations. It is still very much a growing field.

Elastisys is part of the Umeå based incubator Uminova Innovation, providing the team with business support and a good space to work in.

– The support over the years has been very helpful, both with hammering out the early business models but lately also by providing networks to collaboration partners, investors and customers. We’ve also had the opportunity to travel to different industry conferences where we’ve met a lot of potential partners and customers, says Robert.

The company also received a lot of help from Luleå Tekniska Universitet (LTU) and specifically the project Forskning, Utveckling och Innovation (FUI) for data centers and cloud, he adds.

Elasitisys have several big partners that they collaborate with to get the products to market, most noticeably perhaps is Canonical (owner of the operating system Ubuntu) and Tieto.

– I’m inspired by learning and the challenge of looking at new technology and trying to figure out where it fits in and the use cases for it in different industries, Robert concludes.