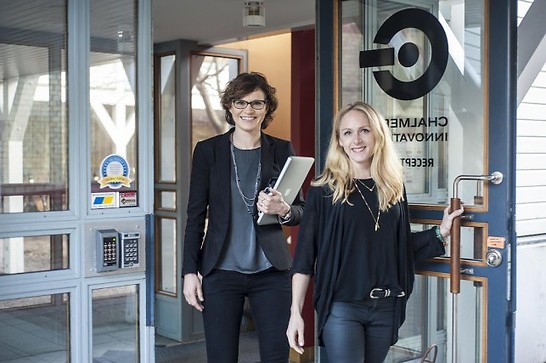 Kristina Lagerstedt’s company 1928 Diagnostics is creating a “bioinformatician” in a box.

“We use the bacterial DNA code as a genetic fingerprint and match it to our databases, which makes it possible for hospitals to detect antibiotic resistance, identify bacteria and share data with each other”

1920 Diagnostics is deeptech of the week!

Building a universal SaaS tool for fully automated bacteria analysis at hospitals, saving the power of antibiotics in a post antibiotics era.

Bioinformation in a box

– As much as 90% of children with acute lymphocytic leukemia survive, and that’s of course fantastic figures. But out of the 10 % that doesn’t, it’s not due to the disease itself but rather to bacterial infections that cannot be treated fast enough and becomes lethal since the patients’ lack of an immune system after going through chemotherapy.

Kristina and her colleague Erik worked with leukemia when they got the idea to use his bacteria database and put it in the cloud, creating a user friendly and fully automated process for determination of bacteria resistance for hospitals.

– Manually, you’d need to hire people with bioinformatic skills to analyze data. The 1928D platform is like a bioinformatician in a box, fully automated and easy to use.

It’s all about tempo

Kristina has previous experience within the innovation system, aiming to turn scientific results into commercial products. 1928 Diagnostics was the first one that really went from idea to business.

– One of the reasons I didn’t continue as a scientist is because I appreciate speed in my work, which is not always the case in academia.

Kristina and co-founder Susanne met at AstraZeneca back in 1999, and together with Erik Kristiansson from Chalmers University of Technology, they founded the company in 2014.

– In the beginning, we ran around meeting hospitals and big investors at the same time, we switched modes several times a day. That’s why I often bring two pair of shoes, sneakers and heels, says Kristina.

They also talked to many actors from the ecosystem from start. Among them GU Ventures and Sahlgrenska Science Park, specializing on the healthcare sector.

Chalmers Ventures have a big network, and knowledge in turning science to sales, says Kristina.

–We got a lot of support and encouragement, e.g. with setting up the company, agreements, early market related activities and last but not least – pitch training. Going from being a scientist to become an entrepreneur means turning your retorical perspective upside down - from defense to sales.

Today, 1928 Diagnostics is a 14-people team with two investment rounds, and customers and leads in the Nordics, Europe and North America.

– Now we’re ready to move into sales, and expand to the U.S. We were thinking global from start, maybe that sounds like a bold statement, but we really believe that our platform has big potential.

1928 Diagnostics is a biotech company developing a Software-as-a-Service (SaaS) tool, for the healthcare sector. For them, scaling means adding new bacteria:

– Our first product is for MRSA bacteria, which causes the majority of hospital acquired infections worldwide. Now we’re adding new bacteria to our product platform, such as Tuberculosis, E. coli and Klebsiella. The more bacteria we provide in our database, the easier it gets for customers to scale usage and benefit from automation.

Medical data out of big data

Being an early stage startup with few real competitors means they have to do all the ground work themselves, and really put the user experience first, Kristina explains.

– Being an entrepreneur is about doing a lot of different things. Growing the team, building sales. We’re a SaaS company applying technology business models into healthcare, which means we need to build an easily adapted product that fits on different markets.

One key is working closely with the customers, she says.

– We understood early that our customers also want to analyze bacteria for surveillance purposes, meaning information about the spread of bacteria. We use the bacterial DNA code as a genetic fingerprint, which makes it perfect to track and compare to other bacteria.

A shared vision, not only within the team but also within the customer and investor network is of great importance, Kristina tells me.

– Antibiotic resistance is one of today’s biggest challenges to solve. Knowing that we continuously make lives better for patients, that what we do really makes a difference, drives all of us.

Laughter and the having-fun-at-work factor within the team in all seriousness is another important driver, Kristina explains.

– Me and Susanne are really good friends, we share the same tempo and we laugh a lot together. Building a biotech company for hospitals on a world market, that’s a hard challenge and a lot needs to be done in an near perfect way.

Among challenges encountered, one has been to establish the sales processes and finding the perfect pace for scaling on different markets.

– Even though working closely with our customers is key, it takes time. We need to be everywhere, but in a structured way.

The same goes for scaling within the company:

– We’ve hired a great team, but it’s a challenge to maintain the tempo while on-boarding a lot of new people.

Another challenge has been to identify “the lowest hanging fruit”, the right customers and the early adopters. The team has been working a lot around them, building use cases and testimonials, Kristina explains.

Alexander Fleming discovered the penicillin in 1928, and already when he held his Nobel speech somewhat 20 years later he raised the concerns of misusing antibiotics will cause resistance, Kristina explains.

– As we’re now entering a post antibiotic era, 1928 Diagnostics wants to contribute to save the power of antibiotics.