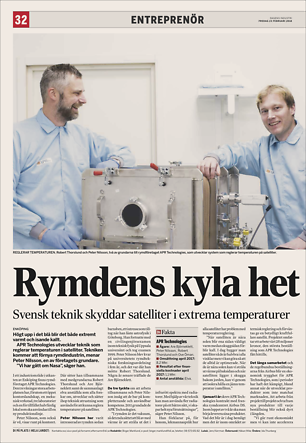 Meet the 40-something dad from the Swedish west coast, who’s also an entrepreneur and physician adding coolness to space.

“We’ve had to promise to deliver something we were not really sure it is even possible.”

APR Technologies is one of the 10 winners of the 2018 ÅForsk Entrepreneurial Scholarship – hence deeptech of the week!

– This is an acknowledgement that we entrepreneurs do something good for the society. It’s very encouraging on a personal level but it also creates positive attention and publicity, as well as a reference and increased credibility along customers, suppliers and investors. Hopefully it helps enthusiasm:ing the next generation teenagers and kids in Enköping, Uppsala region and rest of Sweden, says Peter Nilsson.

Peter Nilsson is a 40-something dad from the Swedish west coast. With a background in physics, he has worked with miniaturization of systems and instruments for space use:

– I’m actually one of few Swedes that have worked at the NASA Jet Propulsion Laboratory, with instrument for water detection on other planets.

Building from a specific request from the European space industry, APR Technologies developed liquid cooling solutions without moving parts for next generation satellites. It is based on ion acceleration combined with Micro/Nano technology, enabling up to 50% increased performance of a typical satellite platform, Peter Nilsson explains:

– The technology can be used for many things, but we are currently focusing on large and small satellites as well as the expanding Electric Vehicle market where we can significantly lower weight, increase safety and charge faster.

Collaborating with NASA, Volvo and more

The founders joined Uppsala Innovation Centre (UIC) and the incubator’s business lab in 2012, and since last year the company is also connected to the European Space Agency’s Business Incubation Centre (ESA-BIC).

– We plan to join the UIC Accelerator program this year too. It gives network, access to competence and a reference for credibility. Also, self-confidence and training, says Peter Nilsson.

Vinnova and The Swedish National Space Board has also been very supportive, he adds.

– Without them, we wouldn't have been where we are today.

– We’ve had to promise to deliver something we were not really sure it is even possible. But just because no one else managed it, does not mean that we can’t do it. With the right team of competence and additional funding through consultancy services and early stage products sales we managed to keep broad competence, focus our efforts and survive economically. One key thing is to find synergies between tasks while minimizing time and cost needed for administration.

– As an entrepreneur I try to be a kind, cooperative person and build friendly-oriented environment and network.