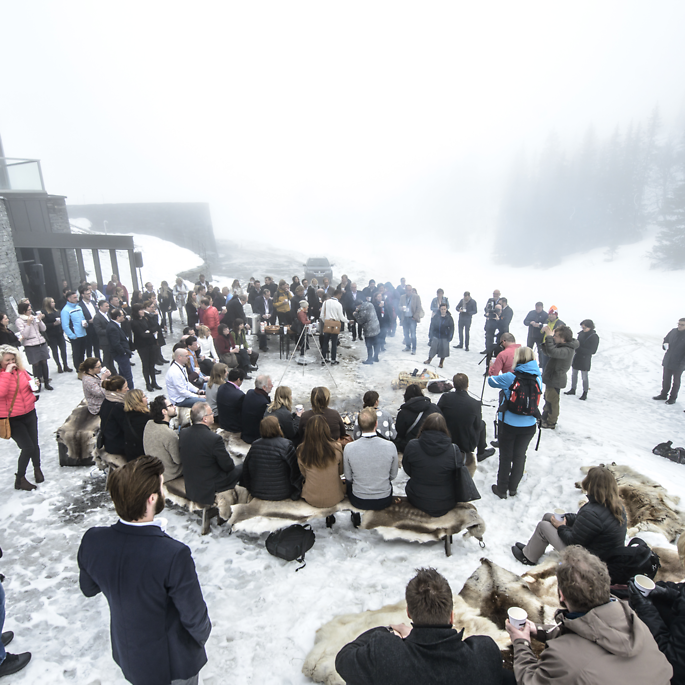 Peak Region is one of Europe’s hottest sportstech scenes

Åre is not just Scandinavia’s largest ski resort but a growing hotspot for startups and scaleups, attracting entrepreneurs to experience the unique active lifestyle at hand. Here’s about the accelerating region from the incubator point of view, Pelle Simonsons take on smart specialization in sportstech and how Åre is going global.

Pelle Simonson and I met over an early coffee in Stockholm a few weeks back, when he’d just got back from a weekend in the Swedish archipelago, paddling kayak and enjoying the first few days of summer this year. Most of his days tho, Pelle spends in Åre.

Åre is Scandinavia’s largest ski resort and a year-round thriving small town at the foot of Mount Åreskutan. Literally located in Mid Sweden, Åre’s known for its sweet mix of active sports and outdoors experiences and the social community lifestyle.

Åre is simply the growing go-to for pleasures such as mountain biking, rafting, paragliding, skiing – and founding companies.

Pelle Simonson is running the Peak Region Incubator in Åre, which also hosted the 2016’s edition of Sveriges Innovationsriksdag – our national innovation conference – which during that year centered on how to boost attractiveness and internationalization.

As smart specialization unfolded as key strategy, a definite hot topic during the conference was the soon to become House Be, the (read: idea of a) new startup hub in Åre centering on sportstech.

THE STORY OF HOUSE BE

Long story short, House Be started from the grassroots by a bunch of ski loving entrepreneurs at the informal Åre Coffee Club meetups (see Boulder Open Coffee Club in Colorado – a story in itself), where Knut Rost, board member of Peak Region AB and the CEO of Diös (northern Sweden's largest private real estate company) first got introduced to the idea.

Needless to say, he liked it. During Sveriges Innovationsriksdag 2016, Knut made an on-stage announcement testing the reactions around establishing House Be. The concept launch got extremely positive feedback and got picked up by the media.

Just about a year later the idea went from grassroots to bricks and stones.

– The real takeaway is daring to narrow and niche. In order to compete with these, smart specialization is key. Sundsvall for instance, specializing in forest innovation and acceleration, or the Game Incubator in Skövde, Pelle says.

– It’s important to make sure Vinnväxt connects with Sweden’s Science Parks and Incubators, and that we all co-use the structures instead of working in silos. Critical mass combined with a niche expertise is what brings new relevance to the market.

The Peak Region Incubator is already backing up more than a handful sportstech startups and will now continue in developing a national scene for startups in Sports further.

– With Peak In Sports, the branding of the national sports startup scene together with SportsTech World Cup – Nordic Edition (a global challenge for sportstech companies) we will build the best structures and network for our startups to succeed. Our experience tells us that successful athletes often have the same behavior, drive and focus as successful startup entrepreneurs.

A striking example, Pelle tells me, is MarsBlade run by the former hockeyplayer Per Mårs and where on of the owners of Marsblade is the famous hockey player Nicklas Bäckström. The company is developing ice and inline skates based on their new Flow Motion Technology, now launching and introducing to NHL.

Another one is PlayMaker, a football analytics tool backing investments in new players with data, serving clients from the U.S., China, The Czech Republic, and more.

ÅRE TO NORDIC INNOVATION HOUSE IN THE VALLEY

Pelle strongly believes in connecting with the international scene and is working actively in bringing new influences back to Sweden from visits to the Valley. Next one is January, lasting for a whole year as he has received a scholarship to work at Nordic Innovation House in Palo Alto.

– It’s an amazing challenge and opportunity to develop network and competence. A few years back, I went to visit for a week which gave me a bunch of inspiration and best practice to bring back to Åre. Imagine what will come out of a whole year.

At Nordic Innovation House, Pelle will support Vinnova’s Anne Lidgard as well as Swedish companies coming to the Valley thru programs like TINC.

– Additionally, I will focus on boosting future of health. Pfizer summed it up really well during this year’s Sveriges Innovationsriksdag; today we pay for medicine and act on sickness instead of preventing it before being affected on the whole. Looking at positive effects and proactive actions such as exercise, eating habits, mental health etcetera, here’s were sportstech can become extra interesting. Also, it’s fantastic that my employer views it as an investment for the Jämtland regional innovation system.

So how can this little village with a population of around 12000 people be growing into a vibrant entrepreneurial scene and attractive business forum for Swedes and newcomers?

Our CEO Magnus Lundin joins me and Pelle at the table.

– At home they think I exaggerate, but I often refer to the incubator as a micro innovation ecosystem. Looking at the building blocks, we have the entrepreneurs, the angels, the private equity and the public funding, we have the networks, the business developers and the niche competences. Almost the full list of all things necessary to successful ecosystems, Pelle concludes.

Next: Sustainable Mobility As a service