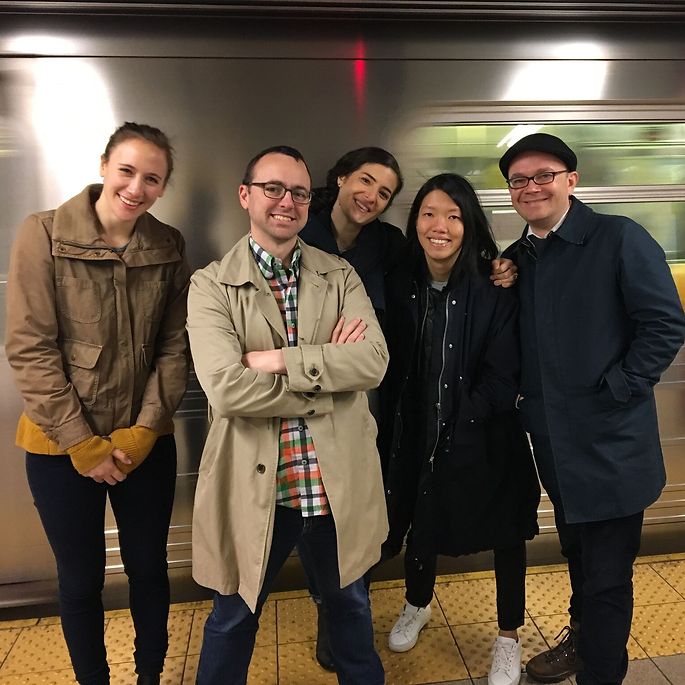 IDEO on sustainable mobility research in Sweden, science parks as champions, and talking to “regular people”

Meet IDEO’s Alex Gallafent, Loren Flaherty, and Vivian Lo on the importance of spending time with end-users and the sense of Sweden from a New York perspective.

The leading global design and innovation firm IDEO is working to uncover unmet human and systemic needs across the full picture of Swedish transportation.

They’re speaking with many kinds of people, from those who influence policy, established commercial operators, and bold startups to everyday Swedish citizens, including those who are already participating in aspects of the sharing economy.

Sustainable Mobility as a Service is an international project initiated by A Challenge from Sweden to meet mobility needs of tomorrow.

Built on a human centered, challenge driven approach, the project is co-developing new solutions and profitable business models that contribute to Sweden reaching a fossil free transportation sector before 2030.

Catching up with the IDEO team on their last day in Sweden, we had a nice chat about the importance of spending time with end-users, the sense of Sweden from a New York perspective, the upcoming mobility challenge, and the role of Science Parks in bringing new ideas to life. Meet IDEO’s Alex Gallafent, Loren Flaherty, and Vivian Lo.

8 hours, 34 participants, 92 cups of coffee, and one target: Becoming better equipped for the transformation to a sustainable transportation sector in Sweden. What’s your take on the initial workshop from last month?

“I was impressed by the energy in the room,” Loren begins. “There are many initiatives going on in Sweden already and the workshop wasn’t so much about coming up with new ideas, but rather going forward with existing ones.”

“Yes, based on conversations from that day, I think people were craving the end-user perspective,” Vivian adds. “For instance, we had a panel session with three citizens, which gave the workshop participants a taste of the IDEO way of doing research, and also set the stage for what’s to come.”

Workshop participants were excited to spend time with ‘regular people’, says Loren. “Many of the challenge participants come from the tech world, whereas we come from an end-user perspective. It was a first opportunity to put themselves in the shoes of commuters.”

“Yes, we’ve been in Sweden for two weeks having conversations with stakeholders, technologists, public transport authorities, you name it. Our core focus, however, is on the end-users,” says Alex.

“Whether getting around in cities or in the countryside, for us to really understand what people need so that we can design good things, it’s important that we spend a meaningful amount of time with them,” he continues. “Not just in formal meetings but rather visiting them at home, learning about their transport habits as well as their lives, dreams, their living situation, and behaviors. Some things they tell us directly; other things are not verbalized but more observed. And from all of those conversations and observations we’re able to find patterns of behaviour and opportunities for design.”

“No such thing as ‘mobility’ on its own”

So the next step is drawing out patterns from the field research: behaviors that are similar or different, and cultural norms or beliefs that are distinct to Sweden. From a New York perspective, what makes Swedes and Nordic people special?

“At IDEO, we’re eager to learn as much as we can during research. But we’re also really respectful about what the nuances that we can’t learn in two weeks,” says Alex. “That’s also why we collaborate closely with the team in Sweden, to make sure we’re not making assumptions that are inaccurate or silly. We’re not interested in stereotypes. That said, being an outsider does create a space where people can describe Sweden in a way they don’t normally do to each other. One thing that has been said to us is that Swedes are often very protective of their personal space, and not so comfortable speaking to strangers.”

“And we’ve noticed a deep connection in people to the countryside and the natural world,” says Vivian.

“Yes,” Alex concurs, “that wasn’t something we expected to see so clearly: many Swedes live in highly developed, advanced, technological cities, but nature—or the idea of nature—remains deeply rooted in people’s hearts.”

“Oh, and on a personal note,” adds Vivian, “we think most Swedes have very beautiful homes!”

How does all of this relate to mobility?

“We were reminded that there is no such thing as ‘mobility’ on its own, even if the technical conversation focuses on that word.” says Alex. “People are always using mobility to do something—they’re completing one kind of task or another. Sometimes the transportation is planned, sometimes it’s not, but it’s always about getting somewhere to do something else. It sounds obvious, but it’s important to remember, especially if we’re interested in shifting people’s behaviours over time.”

Loren continues: “We also saw that mobility is often connected to people’s life stages, and reflects changes in their life situation. If you think of the car, it used to represent high status for someone, whereas now it is not always as seen as cool as before. For many, owning a bike is cooler. Today, the car is more centered around family life. Having a kid means moving to the suburbs which means owning a car. It’s a connected chain”.

“People often feel like they don’t have an alternative in situations like that,” adds Alex. “And that’s a great design opportunity”.

Alex, Loren, and Vivian continue to discuss their time in Sweden. They’re exploring how different themes intersect, from Swedes’ love of nature and the importance of freedom and individual control to larger societal goals and the behavior of communities.

“One of the many inspiring things about Sweden is its societal commitment to a sustainable future,” says Alex. “Not only is Sweden creating that future within its borders, but it’s motivated to be valuable to the global community. Yes, Sweden is a small country. But its ambition is great, and the potential impact of its contribution to the world in this area is extraordinary.”

“We met with Sandbacka Park, Johanneberg Science Park, Ideon Science Park, Lindholmen Science Park and several others during our two-week’s tour,” says Vivian. “You really feel a sense of community there, and a strong entrepreneurial mindset. At each science park, you could feel the energy, the buzz, and see rituals that bring the community together. One of their most powerful values is their ability to connect and empower people.”

“In the shift from imagining the future of mobility in Sweden to actually making it happen,” Alex adds, “the science parks are well placed to be powerful participants and champions for the best ideas. They iterate, prototype and test. What’s even more interesting is how they move from innovating themselves to helping others to adopt similar behaviours.”

Is it time to revise the challenge topics?

The IDEO team says that because they’ve only just returned to New York from their research, it’s too early to talk about the specific topics. But, in collaboration with their colleagues in Sweden, they expect that they will include three things: helping people adopt new behaviours; developing ways for different stakeholders to collaborate more effectively with each other; and helping ideas move from theory to implementation.

Sweden has enormous knowledge and skills to build from, says the team from IDEO. The next moment will be about bringing the best ideas to life to help improve people’s lives, now and in the future.

Now back in their New York studio, the IDEO team is digging through all of their notes, photographs, and memories to find the patterns and opportunities that can inspire the next phase of design.

They have also started to develop a set of low-resolution prototypes to help them and their Swedish colleagues explore different approaches to the Challenge. Creating prototypes—often just with pen and paper—is way to present ideas early so that others can understand your intention and offer feedback and critique. It’s a technique that helps the design work move quickly and effectively—and without wasting time or resources on ideas that may not be effective or appropriate.

Who's in the IDEO team?

The IDEO team is multidisciplinary. While each team member has specific areas of expertise, they collaborate on all aspects of a project. It's the range of different perspectives coming together—combined with the expertise from project team members in Sweden—that allows them to imagine and design new ways of approaching this topic.

Vivian Lo is the team's Senior Interaction Designer. Vivian is an expert at understanding complex systems and designing ways to activate them better, especially through approaches that combine the digital and physical. Before IDEO, her work included analytics tools for financial institutions and mobile experiences for the Emerging Markets at Google. She trained as an industrial engineer and subsequently received her MFA from the prestigious Umeå Institute of Design in Sweden.

Alex Gallafent is a Design Researcher and Writer. He works to understand what makes people behave, think, believe, and change. Before IDEO, he was a journalist with the BBC and a composer and sound designer for theatre.

Randy Plemel (not present at interview) is the IDEO team's Project Leader. An architect by training, Randy leads IDEO New York's city-based innovation portfolio, where he has worked to reimagine the civic commons across eight US cities, to cultivate city-based innovation in the U.S. and India, and to help organizations support livable communities through design.

Lauren Shapiro (not present at interview) is the team's Software Developer. She loves to create and enjoys expanding her toolset by working with new technologies. Before IDEO, Lauren spent time at Microsoft and Apple. She's created full-stack web applications, worked on native mobile apps, and produced countless scripts to make life better for people.

A Challenge from Sweden is a platform for need driven innovation founded by the Swedish Energy Agency, and co-developed with Swedish Incubators & Science Parks.

The platform connects committed customers, solution providers, investors and experts to collaborate on the transition towards 100% renewable and the vision of a sustainable energy system.