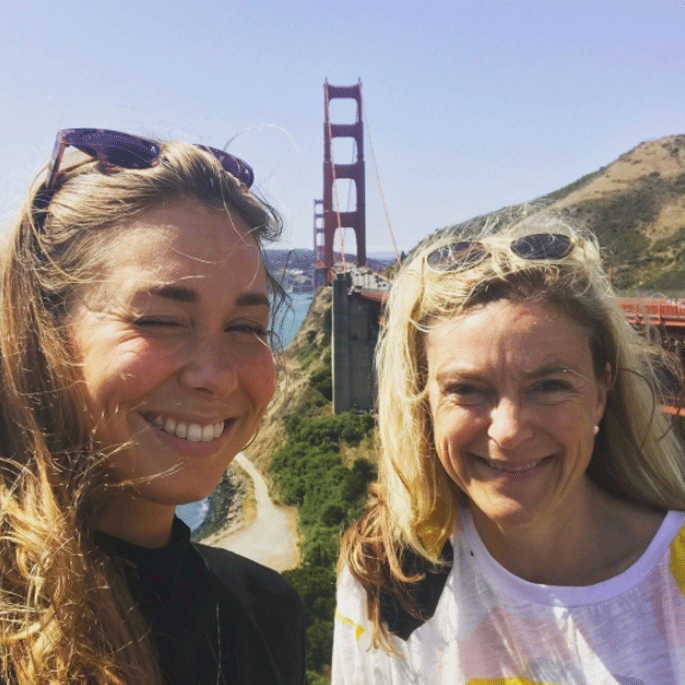 20 observations from the Bay

Here are 20 observations from my two weeks workation in the California startup epicenter. / Jenny @SISP

20 observations from the Bay

Is it the sun, the access to capital, or the fact that people are so generous with their time and contacts? What’s the secret sauce of Silicon Valley?

You’ll definitely find some of the key ingredients in here, but also what Sweden brings to the table, as well as the things we maybe should not copy/paste onto the North.

All quotes are real, directly transcribed or paraphrased from the people I’ve been lucky to meet while visiting, however some unlabeled out of courtesy.

Here are 20 observations from a two weeks workation in the California startup epicenter.

#1 An inevitable advantage: the sun

Just like Lena Miranda, CEO at Science Park Mjärdevi and California partner in crime, writes: The sun is a key ingredient in the Silicon Valley success story.

“It’s not a place, it’s a mindset” is a reoccurring saying, just like how “the reason coming here should be to learn the way of living”.

Silicon Valley culture encourages people to quit their high-paying jobs at big corporations to start their own. It’s almost an obligatory thing to have done somewhere down the line, and people here are paradoxically enough more likely to take the risk (or rather, “the chance”) though the social system is not nearly as convincing.

Climate impacting culture might not be the full explanation, but it is at least an inevitable advantage having the sun, the palms, the coastline. People simply come here to live a good life.

Is it possible for countries like Sweden to copy/paste #1?

Well, yes, if looking at how to use local assets instead of what those are. Åre is a great example of how a complete different landscape runs under the same principle: Attracting talent to the region thru positioning itself as the obvious go-to for X (in the Åre case outdoor pleasures such as mountain biking, rafting, paragliding, skiing – and founding companies).

The math is pretty straight forward. Just like with most newfound companies going to market, it’s all about user acquisition and retention.

From salaries to funding to living costs, you simply add a zero.

For instance, angels normally invest around a million and a half SEK per company (compared to the 200K at home), and a month’s house rent easily adds up to 45K, matching the average engineer’s paycheck of 80-150K.

As such, what’s “early stage”, “startup”, and “incubator sized company” can be somewhat confusing. In Sweden, we might refer to a team of three with a 5 MSEK turnover, whereas here it could mean 20 million and 100 employees.

California alone is the world’s 6th biggest economy, and the US market is simply supersize in every way, making it a perfect place to scale.

I learned, it’s not uncommon that people here open the conversation with a disclaimer saying how “America is a little upside down right now”, that “remember it’s not symptomatic for the entire country”, “four years’ tops“ and “we’re decentralized, so the impact isn’t that big”.

In contrast, I’ve seen Trump stickers on computers, or in windows facing the street.

Regardless, people are generally not as afraid to state their opinion, political or other and that definitely adds to the atmosphere.

“Karl Marx said that ‘For the first time, the world meets in California’. People come from all over the world to California to self-actualize. That's why the economy is booming.”

However, housing is a huge political challenge in Silicon Valley. Building dense areas close to public transportations could be a solution, but the established community strongly rejects the idea as they “want to keep things the way it’s been”.

As such, the very nature and success factor of the area – being an open community – is ironically enough getting lost.

The general reaction to Lena demonstrating her in-body chip, an NFC tag storing things like office keys and travel cards for the Swedish railway, was a mix between fascination and fright.

Besides Sweden being technologically avant-garde, it says something about our trust to the public sector, as well as our open attitude towards sharing personal data.

Americans on the other hand, have a love hate relationship we were told: loving connectivity, but despise the idea of a big brother. The thing is, municipalities shouldn’t be nearly as intimidating as the big corporations:

“They both have bigger capacity to act, and less requirement around transparency when doing so.”

#7 The Swedish sister in Cali

With almost as ambitious sustainability goals as Sweden’s, Palo Alto is one of the few full-service municipalities in the US, meaning that things like district heating, waste management and mobile broadband is run by the municipality itself. Closer to the Swedish setup, and in fact, both Linköping and Gothenburg are sister cities to Palo Alto (gotta love family reunions).

This “tall tree” in the northwest corner of Santa Clara County also backtracks a long history of sustainability management, a strong community, high-ranking public schools and a global reputation.

“Silicon Valley is a reinforcing prophesy” where “talents attract talents.”

However, Silicon Valley’s continuous development is not sustainable. Living is getting very expensive (even for Sweden), and house prices continue to rise. Some of the largest corporations are even providing homes for their employees, but of course not every company is able to do that.

Simultaneously, new local hotspots like Seoul, Berlin, Austin, Portland, and Stockholm is gaining momentum. Add to that, macro factors such as globalization and virtual presence are complete game changers, all and all challenging Silicon Valley’s current position.

"Don't ever trust anyone who says they can predict the future, especially not if the person is from Silicon Valley." Bob Johansen, Distinguished Fellow at the glocal think-tank IFTF (Institute for the Future) in Palo Alto.

#9 A different notion of time

Efficiency is a subjective term. In the Bay, people work less hours and seem to be cramming in fewer meetings on a normal work day too. It’s often ok to book a meeting on short notice, or even just dropping by, and it doesn’t seem like a major thing running a little late either.

There’s an extremely present networking lifestyle and a passing-it-forward mentality here. Connecting people has almost turned into an art form. Maybe that goes back to people having more free time, or maybe it’s because people are just very generous with their time and contacts.

Regardless coming from an investor, an accelerator, a large enterprise, a startup or by the city council -  everyone agrees on the importance of a well-functioning local ecosystem. Critical mass is built on a system level, combining leading universities with successful corporations and public support, and that seems to be a fundamental belief.

But the right conditions for open innovation and the triple helix model relates to scale, and works best in mid-size governments.

There are of course connections between the ecosystem and academia in the US too. Top universities are for instance competing for federal funding, but it’s not coordinated on a national level.

At the end of the day, maybe best is “not too big and not too small, like Sweden.”

The Nordic Innovation House is a Silicon Valley soft-landing for the Swedish, Finnish, Danish, Norwegian and Islandic startups. Today with around 170 virtual members, and 57 of them coming from Sweden.

Emphasizing the importance of niche, or smart specialization, the house focus on three primary areas: Digital Health, IoT and Cleantech.

The house offers two sets of acceleration programs, called TINC (for companies ready to scale), and Reach (a similar setup but for the early stage startups spun out of academia).

The Bay Area is extremely investor driven, and that comes with a surprisingly traditional approach. But the perspective on how to do business is shifting, going from maximizing profit to maximizing social contribution, and this has a direct impact on decision-making within the company.

Generally, Nordic startups are more mature when it comes to conscious, or social entrepreneurship but the rest of the ecosystem apparently is not. The investor’s or business coach’s old way of doing business is obsolete and can sometimes even do more damage than good for the company if not adapting to the new, social way.

Retro fitting autonomy: in the context of sustainable mobility and self-driving cars, means upgrading the existing fleet instead of replacing it. Credits to Palo Alto Chief Sustainability Officer Gil Friend.

Many actors in the US and abroad is interested in tapping into the Swedish ecosystem, and there are several supporting initiatives and organizations for it: the Nordic Innovation House, Silicon Vikings, and Business Sweden being three of them – together with SISP that is.

Sweden needs to continue developing this interface, together with its incubators and science parks, creating stronger connections to the world market. Perhaps a nationally synchronized innovation week in 2018 is a concrete way forward?

America is all about fast scaling and good marketing. Some of the secret ingredients are volume, niche expertise, and perhaps most importantly, a comparative-competitive and metrics driven mentality where startups are not only acting as each other’s support but as triggers, centering on achievements.

These are also some of the sexiness factors to California incubators like Y Combinator and 500 startups. Early stage companies are of lesser interest, and serving carrots is preferred over support. However, most local incubators and accelerators here are private, charging 5-10% of the company profit.

Silicon Valley is very binary in this sense, at least according to some. ”After 30 seconds spent, you either invest or you never talk to the company again”.

If the locals are prominent in marketing and scaling, the Nordics can brag about leading technology and substance, the latter being both a blessing and a curse:

When pitching to an American audience, Nordic companies should either spice it up or give a heads up about the cultural difference - preferably both.

“We’re talking about what we are. Here, people pitch what they are becoming”, says Katarina Chowra, business developer at Uppsala Innovation Center now working at the Nordic Innovation House.

According to Stanford lecturer Steve Herrod, the top three technology areas where enterprises spend most money, and which have the biggest impact on the near future is Security, Cloud, and Big Data.

While our devices get connected, cyber-attacks are gaining sophistication and impact, and for the first time, Cyber security is a board-level issue.

I thought Thomas Middleditch in the Silicon Valley series on Netflix was just ridiculous before I got here, but I’m starting to get irony now.

Innovation hubs are popping up all over the US which is of course both great for competition and a challenge. Just like evaluating startups, there are impressive “deeptechies” making world improvements (both in the shadows and on the big stage), and there are the “disco’ers”, making a lot of noise and to some extent diluting the true meaning and value of the term.

As a newcomer, it’s important to make difference between what’s an incubator, what’s an accelerator, what’s bootstrapping and what’s just a co-working space.

The Nordic countries are small, which means companies are drilled to think globally from day one. However, many companies are “addicted to grants” which makes it hard to access private money, and scale.

The main success factor to European companies in Silicon Valley is when they “come with a purpose”, meaning considering what gaps there are to fill. Come for scale, fundraising, marketing, and partnerships – but leave production, R&D, substance and soul at home.