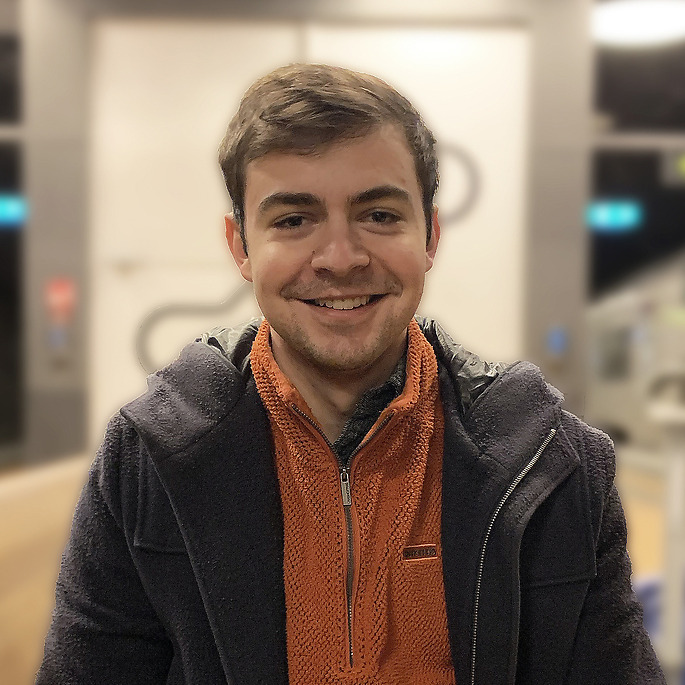 Vårt varmaste grattis! Vad betyder det att få ÅForsk Entreprenörsstipendium 2021 för dig och ditt företag?
- Thank you! It's a pleasure to receive the ÅForsk Entrepreneurial Scholarship on behalf of porkchop. It feels great to have our work recognised, and to have this opportunity to show all of Sweden what we're working on. We're also ecstatic to receive the scholarship as it will accelerate porkchop's development, both business and technical. The money will also help us explore different market segments for our propulsion system.

Berätta lite om dig själv. Vem är du som entreprenör? Vilken är din bakgrund? Vad inspirerar dig?
- My background is in mechanical and aerospace engineering. Since I was a kid, I've always loved shows like "Mythbusters" and "How It's Made", playing with Lego and building things with my hands. My passion for space really started when I saw what SpaceX were doing and realised that space isn't just for NASA anymore - it's for all of us. This is where I began having ideas about how I can contribute to humanity's push to go further out into the cosmos. This is what continues to inspire me to this day.

I think this also translates into my work at porkchop. Everything is driven by our human desire to explore, and we saw propulsion systems as the perfect way of getting started. After all, it's the engine for the satellite to move in space, and it's impossible to picture a car without an engine.

Vad är bakgrundshistorien om ditt företag? Hur kom du på affärsidén och var kommer den ifrån? Hur låter din ”hisspitch”?
- I guess I'll begin by addressing the elephant in the room, which is our name. It's got meaning behind it and not something we picked when we were hungry.

Back in the old days, the engineers at NASA were making plans for visiting other planets, and they wanted to see how much fuel they would need if they launched on a particular day and arrived at the target planet on another particular day. When they plotted the launch day on the x-axis, and arrival date on the y-axis, they got these strange-looking contour plots, which they decided to name porkchop plots. Look them up on google, they can get quite complex and ugly, which is the complete opposite of what we wanted to be. Our name is a reminder to always strive for the best solution for people to explore space with their nanosatellites.

We began as master's students at KTH who were looking for ways to get into space. It turns out that we're not alone, and there are growing numbers of people who want to send things into space. While something like a nanosatellite is a great way of getting into space, we noticed that a major thing that most of them lack is a propulsion system which is like the engine of the satellite and would allow these nanosatellites to manoeuvre in space, avoid collisions, extend their lifetimes and de-orbit themselves at the end of their lives.

While there were plenty of propulsion systems on the market, they were all too bulky, which would leave less space for sensors and instruments (and those sensors are the reason why we send things into space in the first place). In particular, there was a type of nanosatellite called PocketQubes which can fit in the palm of your hand, and we saw massive potential in these.

After a lot of tinkering in the lab and speaking with people in the industry, we developed our first thruster prototype in a basement lab at KTH. From there, we developed the electronics and control required to make an entirely self-contained propulsion system. After we announced our propulsion system, porkchop X, to the world, we received a lot of interest from the community which gave us an indicator that we're onto something.

Vad har varit dina svåraste utmaningar hittills? Och dina viktigaste lärdomar?
- The biggest technical challenge we solved was miniaturising and compressing all the electronics required to power the propulsion system. Previously, these circuits required large components, which would make them impractical in such tiny satellites, and impossible inside a PocketQube.

Despite this, I would say non-technical problems were even more challenging. In the beginning, we had the luxury of using KTH's facilities and the rest of the team could stay in Sweden with their student visas. As graduation approached, we started to realise how much we'd need to do just to keep the founding team together in Sweden. We have also had our launch delayed twice for reasons beyond our control, and my heart sank equally as much each time we received the bad news - it's devastating when you work so hard to meet deadlines only to be told we have to wait several more months.

The biggest lesson I've learned is that if your idea shocks people and you're told that it's not possible, then you're onto something really big. All great ideas were once criticized, and my favourite example is from 1903 when the New York Times proclaimed "Man won't fly for a million years", which was proven wrong just 9 days later by the Wright brothers. We look forward to proving to people, especially young people, that space is becoming accessible to everyone, not just traditional organisations like NASA.

Being part of such initiatives is extremely helpful, especially for a first-time founder like myself. When I started I knew nothing about business, had no network, and I'm not sure porkchop would still be around, so it's definitely had a positive impact on me. I can't overstate the importance of being able to speak with those who have gone through the same things you're going through, both good and bad.

Samarbetar du med andra aktörer, till exempel offentliga eller privata eller kanske har du din första stora kund?
- Yes, we actively work with several market players. We have several strategic partnerships within our niche of the nanosatellite market, and we anticipate that most of them will be customers for the foreseeable future. We have also collaborated with other companies in various ways, and our door is always open for more partnerships.